We live in a time of stark and often violent paradoxes: the increasing liberalisation of social values in some parts of the world compared to increasing fundamentalism in others; the wealth of scientific discovery and technological advances in contrast to climate denialism, “post-factual” and conspiracy-driven politics; freedom of movement for goods and finance while individual movement is ever more constricted and subject to law; a drive towards agency, legibility and transparency of process while automation, computerisation and digitisation, render more of the world opaque and remote. At every level, mass movement of peoples and the rise of planetary-scale computation is changing the way we think and understand questions of geography, politics, and national identity.

These ever-increasing contradictions are seen most acutely at the border. Not merely the border between physical zones and between nation states, with their differing legal jurisdictions and requirements for entry and residency, but also the border between the physical and digital, when we apparently – but perhaps misleadingly and certainly temporarily – cross over into a different zone of possibility and expression.

The artists featured in Transnationalisms address the effect of these pressures on our bodies, our environment, and our political practices. They register shifts in geography as disturbances in the blood and the electromagnetic spectrum. They draw new maps and propose new hybrid forms of expression and identity. In this exhibition Transnationalisms acknowledges and even celebrates the contradictions of the present moment, while insisting on the transformative possibilities of digital tools and networks on historical forms of nationalism, citizenship, and human rights. 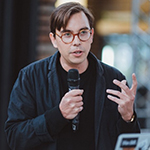