How can we use engineering to visualise, respond to and resist the daily, strenuous – and mostly successful – effort perpetrated by the tools and infrastructures designed by corporate and governmental subjects to engineer us? Intended as “radical tools for interventions in infrastructure”, the works developed by the Critical Engineering Working Group offer different answers to this question, from simplified, easy access to resistance tools, to hijacking technological infrastructures in order to expose their inner workings.

According to the Critical Engineering Manifesto, “the greater the dependence on a technology the greater the need to study and expose its inner workings, regardless of ownership or legal provision”. Thus, it’s no surprise that the three “tools for intervention” presented in this exhibition focus on networked infrastructures and online communication, especially WiFi communication via portable devices: technologies we depend upon to communicate as well as to locate ourselves in the physical space, yet that are also used to control and follow us.

This exhibition is part of the 7th edition of the Tactics&Practice conference series held in Ljubljana in March 26-27, 2019. 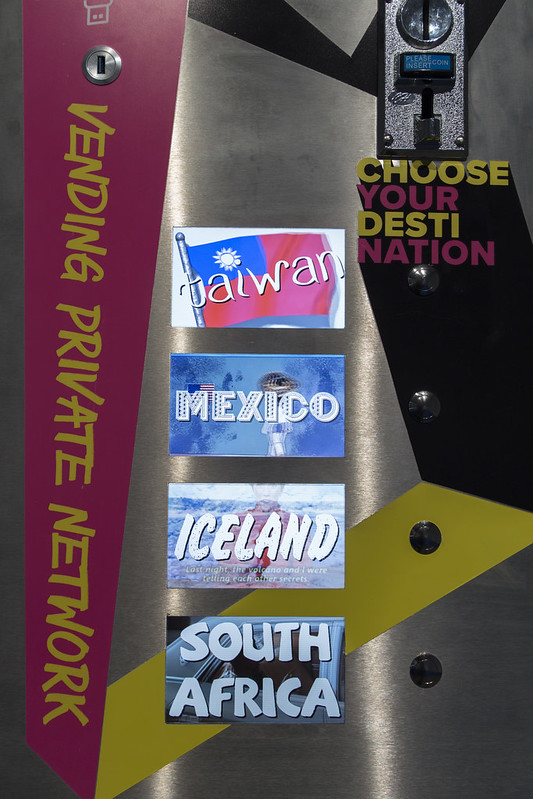 Vending Private Network takes the form of a condom-vending machine, such as those typically seen in public toilets, nightclubs and bars. Equipped with mechanical buttons, a coin-slot and USB ports, it offers 4 VPN routes, each with an animated graphic depicting the route as a fantasy destination. Visitors are invited to insert a USB stick into the slot, a coin (1 pound or euro) into the machine, and to select a VPN destination by pressing a mechanical button. In doing so, a unique VPN configuration file is then written to the USB stick. Special instructions (in the form of a README.txt) are also copied, explaining how to use the VPN in a special “sheathed” mode that evades detection methods (namely Deep Packet Inspection, or DPI) used by corporations and state-controlled infrastructure administrators. This is the only means known to work against state-controlled firewalls.

Packetbrücke (Packetbridge) explores the simulation of entire network situations by transferring the electromagnetic infrastructure to a different physical space. The result is a revealing “confusion” of devices and services reliant on this infrastructure. Wireless network packets are directly captured from a specific location and tunnelled through the internet to a remote location, where they are released back into the air. In doing so, Packetbridge literally injects one electromagnetic representation of geographical space into another, effectively producing a new imaginary topography and, through this remediation, an “impossible reality”. Packetbridge demonstrates that positioning systems based on WLAN are a site for intervention, at the same time expressing their vulnerability to location spoofing attacks.

Inserted into urban environs, Unintended Emissions captures, dissects, maps and projects radio emissions unintentionally and invisibly shared by our portable wireless devices. Employing two arrays of directional Yagi antennas, the project attempts to determine positions of WiFi devices in the vicinity. Similarly to surveillance and tracking systems such as StingRay, Unintended Emissions places mobile WiFi users on to a map indicating the kind of a device a user has, the time of appearance, the user’s network activity and other user-specific metadata. This information can be further analysed to determine the user’s identity and movements within a locality and the internet. Using methods and technologies known to be deployed by federal surveillance initiatives, the intervention seeks to engender a “healthy paranoia” in the interests of an increased techno-political subjectivity.